Darin is in his 11th season as the head boy's basketball coach at Century High School.

Before CHS Darin was with the Bismarck High Basketball program since 1995. He was a member of the staff during the Demons back-to-back state title teams in 2000 and 2001 and also in 2005 & 2008. He also coached the Demons during runner up finishes in 2004 and 2007. Darin is a 1994 graduate of the University of Mary and also a four year letter winner for the Marauder men's basketball team. Darin holds the University of Mary record for consecutive games played and ranks highly in school history in assists. Prior to becoming an assistant coach at Bismarck High School, Darin coached two years at the University of Mary. Darin currently teaches physical education at Century High School. Darin is married to Gerene and has 3 children - Treyton 19, Halle 16, and Bryer 9. 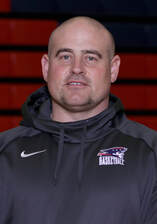 Ky Sayler
asicskds4177@gmail.com
​Ky is currently in his 5th season as an assistant coach with Century High School.  He graduated in 1995 from St Mary's High School.  He went on to play football at the Univ of Mary, graduating in 2001 with a degree in Business Administration.
​​

​Taylor Wilson
taylorw@midco.net
​
Taylor is in his 4th year coaching at Century. He graduated from Century in 2016. He graduated from BSC in 2018. He is currently going to school at the University of Mary for finance and business administration​